I’ve always been fascinated by Famiclones.

The first Famiclones were straight pirated Famicom hardware clones, but by the 90s this had been consolidated down to single chip designs, usually referred to as NOAC – NES on a chip. While NOACs lose accuracy, they can be produced very cheaply and thus proliferated as the gaming machine of choice throughout copyright-infrinegment playgrounds like Eastern Europe, South America and greater Asia throughout the 90s. If you take pirate consoles into account, the Famicom is surely by far the highest selling system of all time. There’s a decent number of Famiclone models documented here.

Famiclones had a second life in Japan after Nintendo’s patent on the hardware expired in 2003. Due to the vast majority of Famicoms in Japan being RF-only, there was a market for a cheap AV Famicom as the retro boom began. One I’ve always wanted to get my hands is was the Famulator, released in early 2008, and I finally grabbed one recently.

One reason is simply the name Famulator, which is too cute, but the tasteful design, of course evoking the original Famicom, sets it apart from your average junk looking Famiclone. 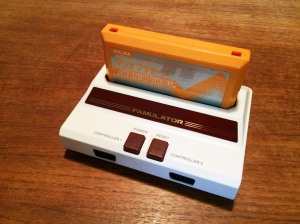 And it’s tiny, barely bigger than a Famicom cart, and less than half the size of the original. Kawaii as hell. The controller, which connects via standard Famiclone DB9 connector, is also quote excellent, there’s very low travel on the buttons, giving it a Game Boy Advance SP feel.

It’s great looking and plays well, and is a pretty decent NOAC Famicom. There is one catch. The earliest release of the Famulator overamplifies the the sound, leading to peaking levels and distortion. And the expansion audio is not connected, so Famicom Disk and other expansion audio games are missing the extra sound channels. Luckily I found quite an easy fix for both on this Japanese website.

The audio can be fixed simply by chopping off the transistor at the position marked Q2, and soldering the right two leftover legs together. It worked perfectly and the regular audio was fixed. 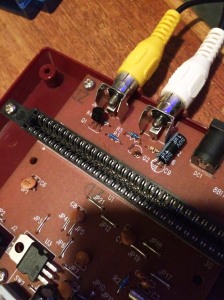 To add support for expansion audio, you can simply insert connections for pins 45 and 46 to the circuit at positive leg of the capacitor at C9.

Of course with plenty of real Famicom hardware around it’s not like this will get a lot of play time, but it’s a cool little toy to have, and yet another part of the rich tapestry of Famicom history.