Splatoon 2 launched on a Friday, so most people were at work. Shops in Akihabara open at 10am, and many were ready for early buyers. 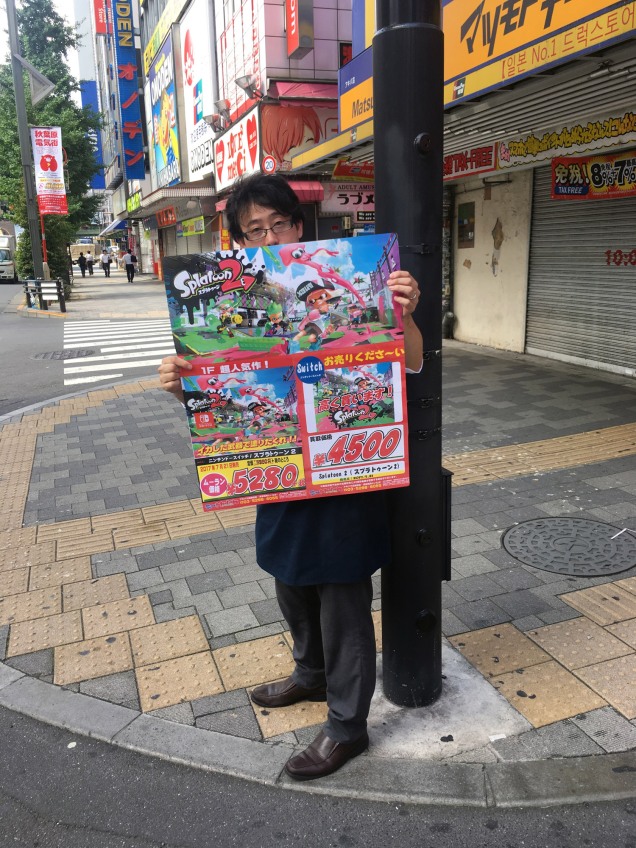 Some larger stores like Sofmap, Bic Camera and Yodobashi Camera set up shopfront stalls, selling the game and related products. 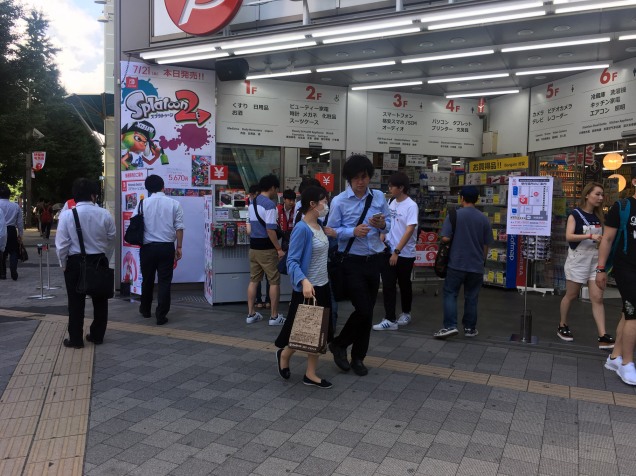 There were some small lines 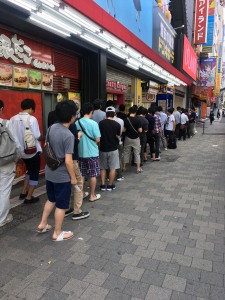 But there was plenty of stock to go around, so it was easy enough to get the game and related items, like Amiibo and neon green/pink joycons. If you were lucky, there were also a few of the licensed (in-game brand) Forge headsets available.

The bigger stores were very busy however – there was a 20+ minute wait at the counter at Yodobashi for example. 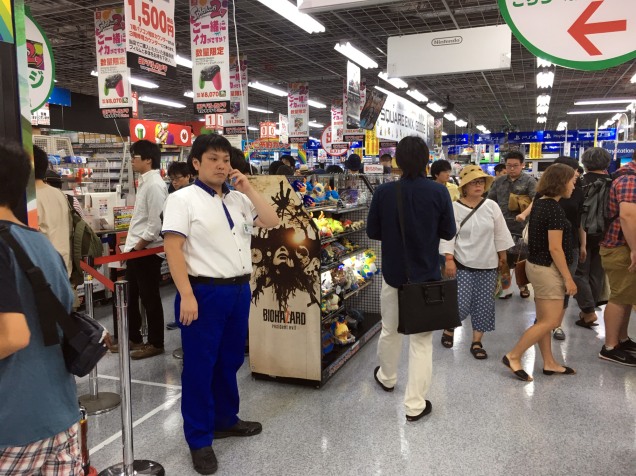 While the game was easy enough to obtain, it’s not so easy to get a Switch console in Japan. This is what you see in most places at the moment: 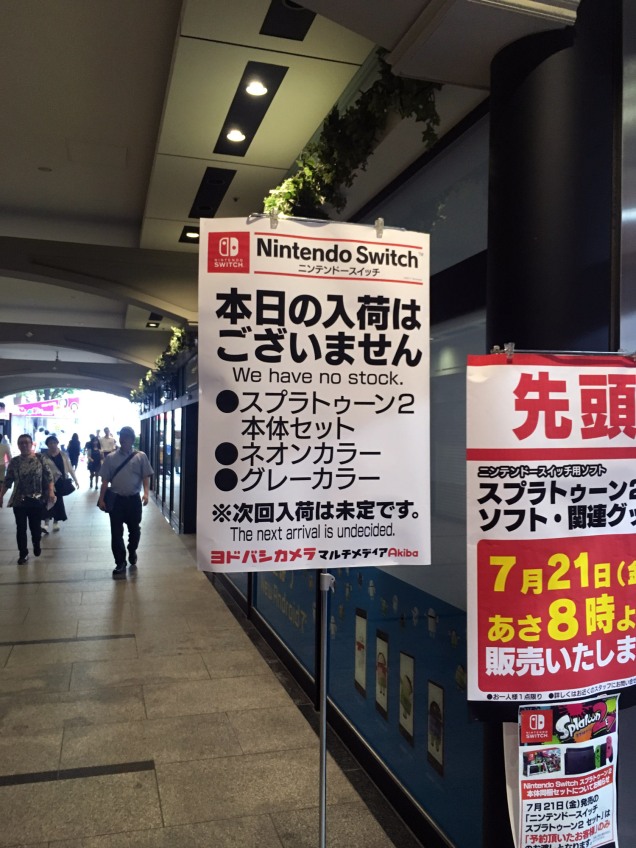 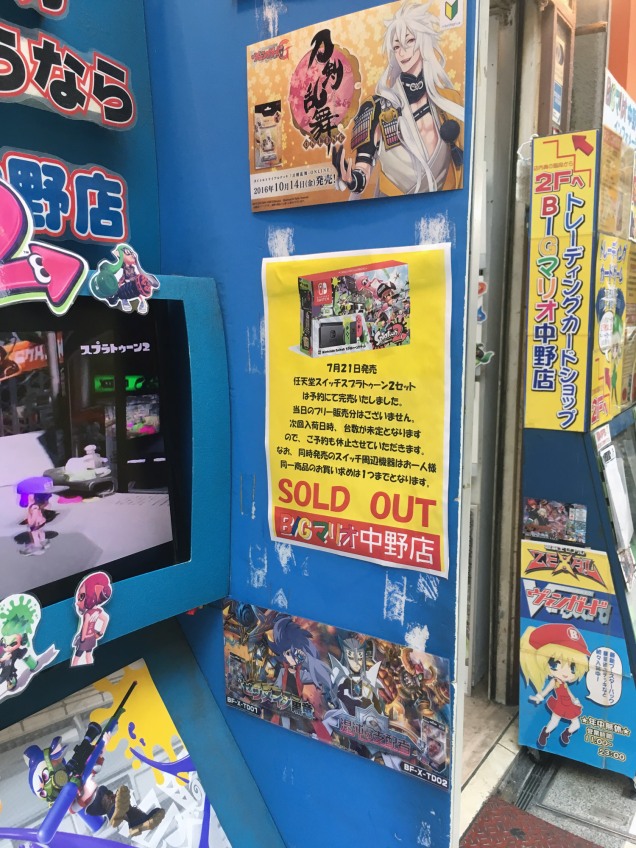 Demand is off the charts and all Switch consoles sell out instantly. Stores only get a certain allotment of consoles, and to determine which customers get a chance to buy one, they run lotteries. 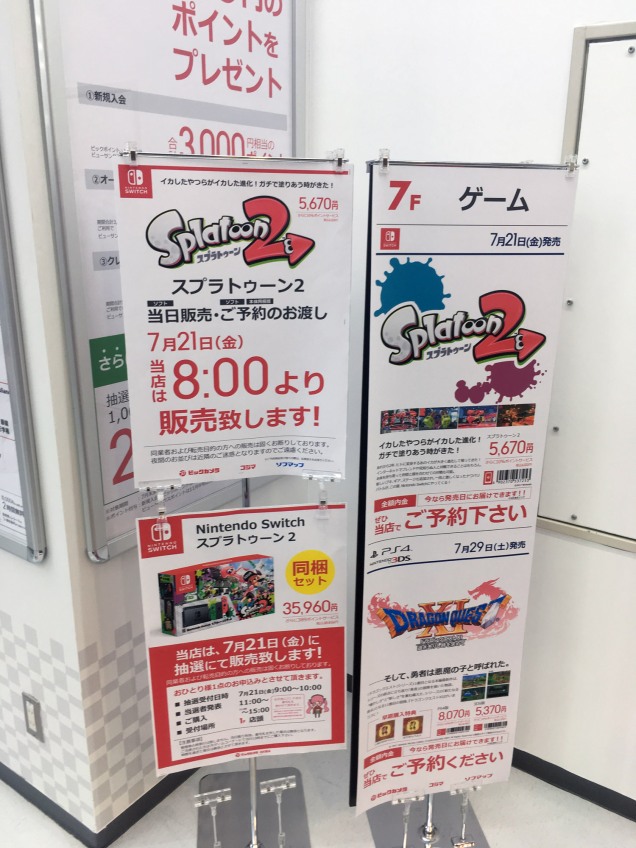 Literal lotteries. Customers are asked to line up at a certain location from 8am and take a number. Later in the day, they draw numbers, and the winners now have an opportunity to buy the console.

This was the line to take a number at the Akihabara Bic Camera store.

After getting your number, you can go about you day shopping, and return for the results announcement.

The results are posted at the front of the store. 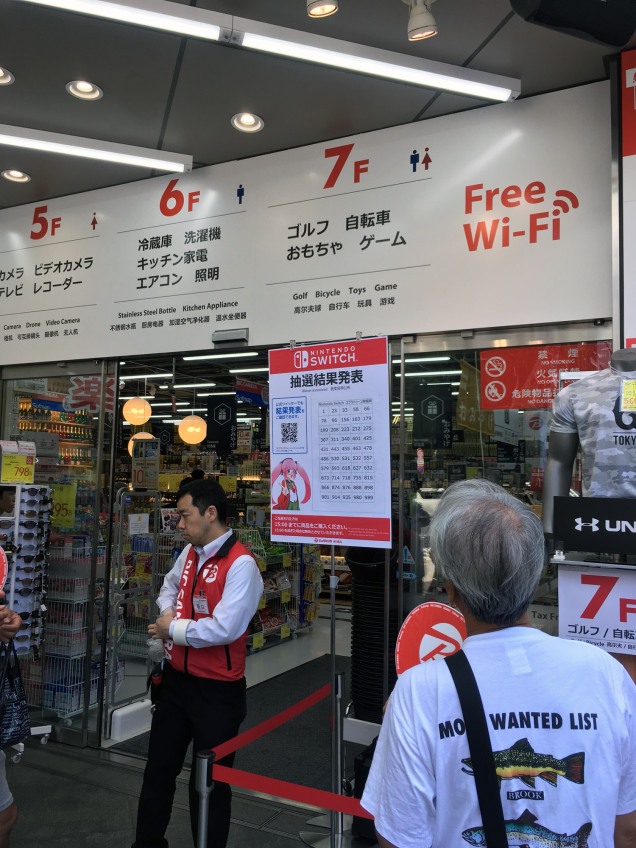 The Splatoon 2 booth was quite busy with buyers at this point, and combined with the rush to see the Switch lottery results, a crush took place.

Or you could buy from scalper stores for double the price! 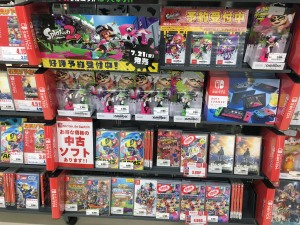 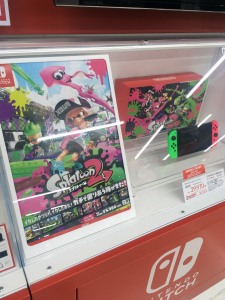 After a long day of observing the craziness, I finally got home to get playing myself.

While Japan got ready to do it all again a week later for Dragon Quest XI! 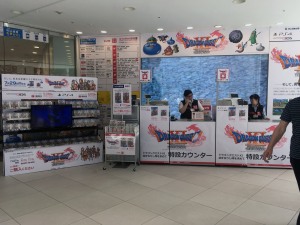 Next up: Splatoon at the Kyoto Aquarium

While I mostly focus on retro stuff on this site, I’ve recently gotten back into modern Nintendo games. And there is nothing more modern, more Nintendo, and more Japanese than Splatoon, a game about punk-rock fashion-conscious highly evolved transforming squid children playing ink-shooting games in a post-apocalyptic future world. Oh, and it features singing idol girls and is set in a suspiciously Shinjuku/Harajuku looking city.

The first Splatoon was huge in Japan, despite the fact the console it was released on, the Wii U, was not. It was a crossover cultural hit with huge merchandising success, and is easily the highest selling home console game in the current generation in Japan, selling more than even huge names on PS4 like Final Fantasy and more recently Dragon Quest.

On top of this, Nintendo’s new system, the Switch, is also a huge hit, having been constantly sold out since launch. Recently these two things combined with the release of Splatoon 2 on Switch. And as expected, Japan has gone crazy for it.

Nintendo has gone all out with ads for the game, with many TV spots, ads running in trains… 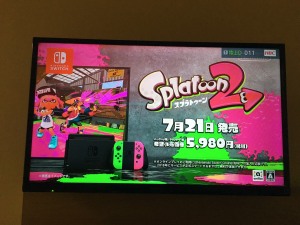 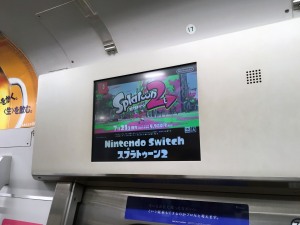 …and standard posters around the city. 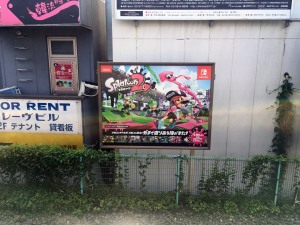 But what sets the Splatoon 2 campaign apart are these: Fashion ads for the in-game brands. 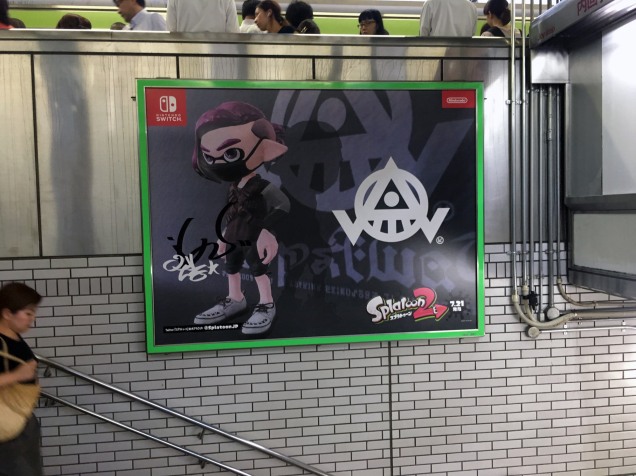 You can’t really go anywhere that sells toys or games or trinkets of any sort without coming across Splatoon merchandise. It is everywhere in all cities countrywide. 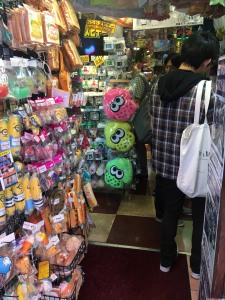 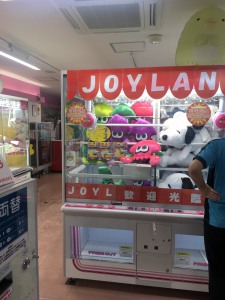 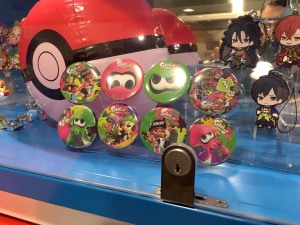 Many companies without a licence are using the ‘rainbow paint’ motif to sell their gaming wares too. 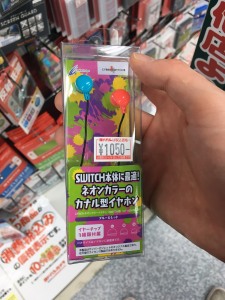 In store displays and ads 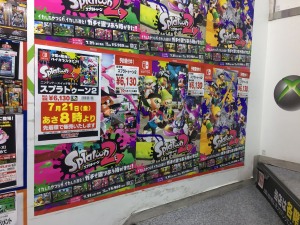 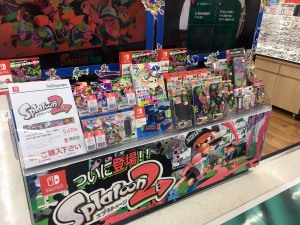 You can buy all sorts of licenced snacks and drinks 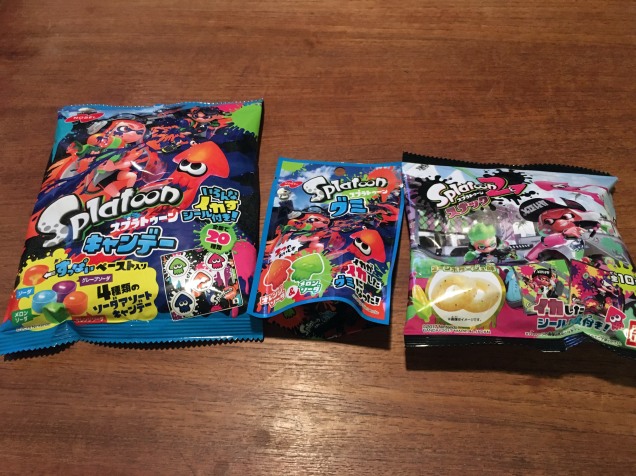 7-Eleven has a promotion to get exclusive in-game gear if you buy the game from them (they sell download code cards) or with certain product purchases. 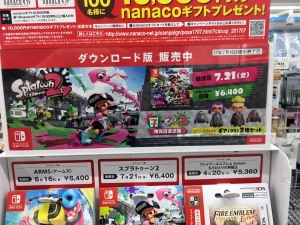 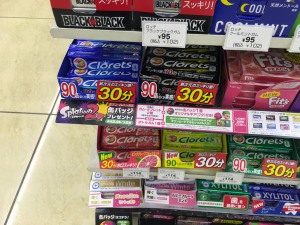 You get a Splatoon badge and a code which can be redeemed on the Switch eShop, and the gear gets dropped off as a package in Inkopolis Square in the game.

The biggest tie-in with a store is probably Tower Records. 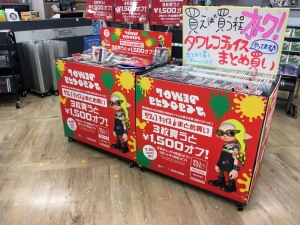 The initial Japanese pre-release Splatoon demo was itself a tie-in, as Tower Records sold the in-game t-shirts for the Rock vs Pop theme. 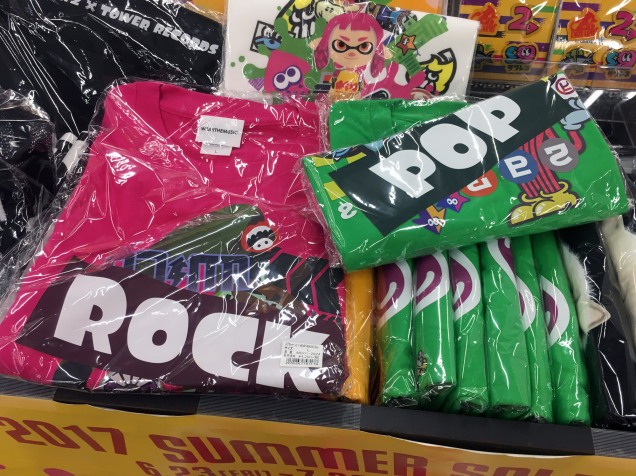 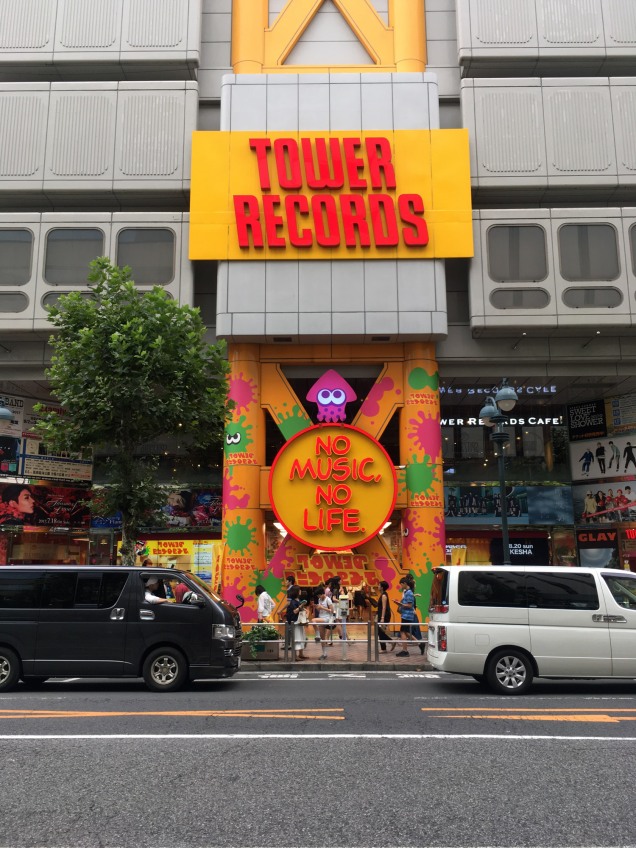 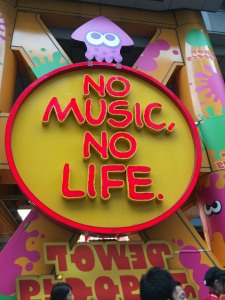 And had a performance tie in with Wet Floor, an in-game band.

While not nation wide, there is a possibly even larger Splatoon tie-in event with Kyoto Aquarium, which I’ll cover in a future article.

Nintendo’s Micro Vs. System series was the cutting edge way to enjoy multiplayer gaming on the go in 1984, combining the multiplayer fun of the Famicom with the portability of the Game & Watch line.

With (semi) detachable controllers for player 1 and 2, each unit only played one game, but quality engineering made the whole thing very cool. 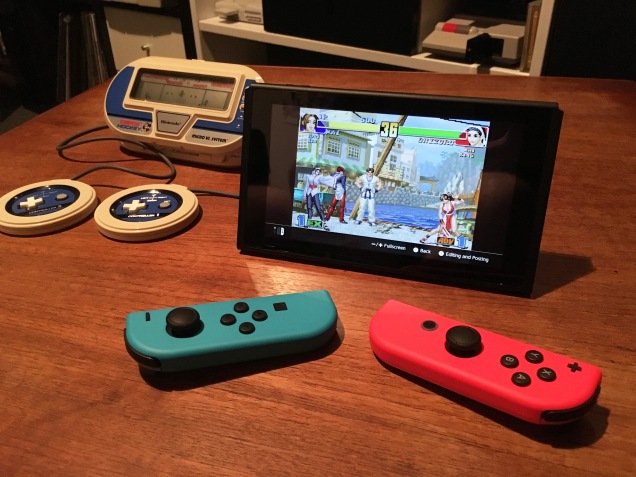 If there’s anything Nintendo loves, it’s revisiting old ideas. Dual screens, stereoscopic 3D, and now on-the-go multiplayer have all made multiple appearances in the company’s history. The hybrid Switch has finally fulfilled the promise of the Micro Vs. idea. 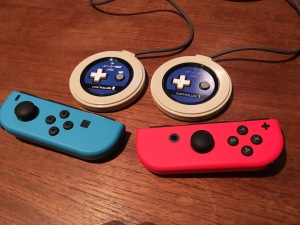 Similarly, in the 80s, handheld Zelda was a massive compromise. Now there is no compromise.

In a sense, all of Nintendo’s gaming history has been pointing here. Exciting times.