Sega were king of the arcade for most of the coin-op format’s history, and their console efforts often attempted to leverage their arcade success into home success. While this would eventually lead them to release one of their arcade boards as a console (the Mega Drive is basically a cut-down Sega-16 board), on their first two consoles it meant ports.

And so we have the Mark III release of Shinobi.

Shinobi is a basic 2D side scrolling action game, which was already a fairly recognisable format by 1987. It stars Joe Musashi, on a mission to stop bad guys who are kidnapping children from his ninja clan.

You move along the stage, attacking bad guys with swords and ninja stars while freeing the kidnapped kids. The game’s gimmick is multiple ‘planes’ of action, and at certain points in stages you can switch between planes with a giant ninja jump. Luckily the bad guys are nice enough to pause and wait for your jump to complete (it’s really supposed to be a sort of ninja movie slow-motion effect I think). Otherwise controls are decent, solid but standard.

It’s broken into five missions of three or four stages each, with a boss at the end of each mission. Along the way you can power up your life bar and weapons, swapping out ninja stars for bombs and a knife, and your sword for nunchucks and eventually what appears to be a Castlevania-style chain whip. 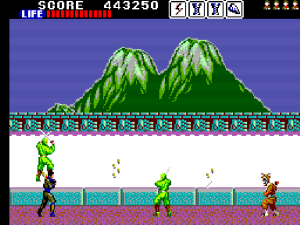 Some later stages can get quite frustrating, introducing bottomless pits and annoying enemy placements. Enemies get weirder and more supernatural as you progress, including some zombie-ninjas and demons.

Bosses are quite good, and largely rely on you working out attack patterns and counter-attacking. With one exception – a giant wall of hindu (Vishnu?) statues. After a million attempts I finally worked out the only solution was to spam it with knives, which worked. Frustrating. 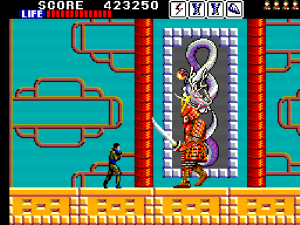 There’s also a very difficult bonus stage once a mission, where you throw ninja stars at two planes of ninjas, shooting gallery style. 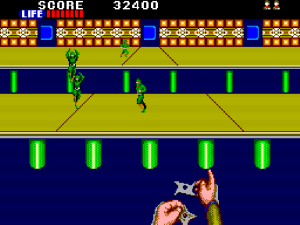 Graphically it’s decent, but nothing special. Pretty middle of the road for the Mark III. Some incredibly strange palette choices make some parts, especially the first stage, look quite garish, but other stages are fine.

The Mark III version is a reasonable interpretation of the arcade game. The arcade game is a much faster, more fluid experience, whearas the home version is a slower and more methodical. There are less enemies, but despite the very different feel, the levels have been recreated quite faithfully. 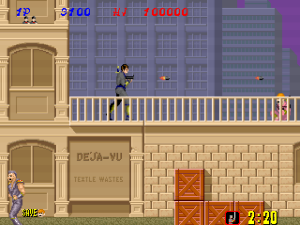 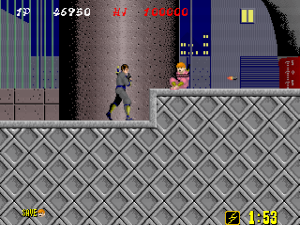 The graphics have also taken a hit from the 16-bit arcade game, but the bright Mark III colours arguably make it more appealing in parts than the drab original. 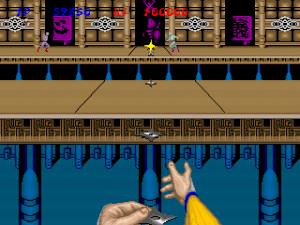 One disappointing element is a common one for Mark III games – small cartridge size. The Mark III had some design flaws that meant it got less graphical tiles from the same amount of ROM than most consoles, and on top of that Sega often chose cheap small cart sizes. What this means is only a couple of tunes for the whole game (much like Makai Retsuden). And what happens when you beat the final boss, the Masked Ninja? 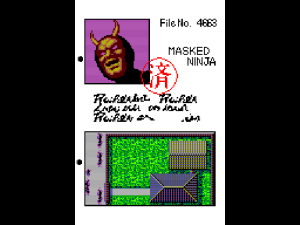 You get this amazing ending:

The tunes at least have FM instrument support, and sound pretty cool if you have an FM Unit. 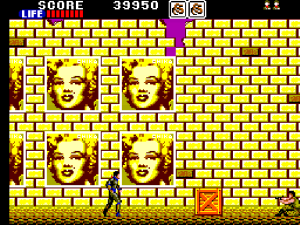 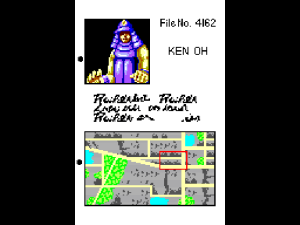