Following my post about the first Nintendo console, here is the first Sega console.

It was in 1983 that this website’s co-namesake entered the home video game market, with their first machine, the Sega SG-1000.

Released the same month as the Famicom (some sources claim the same day), it was a generation behind it in technology and design, featuring performance equivalent to the ColecoVision and first generation MSX. Sega couldn’t have predicted hurricane Famicom was about to redefine video games. 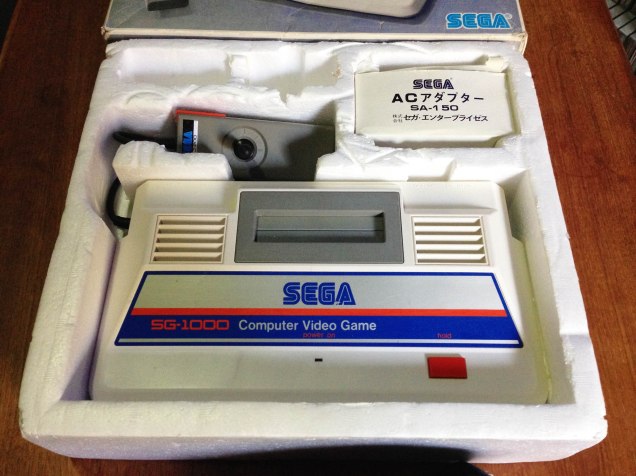 It plays Atari-style tall cassettes (cartridges), and features and Atari style joystick which is tethered  to the left of the console.

The back features a port to attach a keyboard. ‘Home computer’ versions of the hardware with the keyboard integrated were released as the Sega SC-3000. 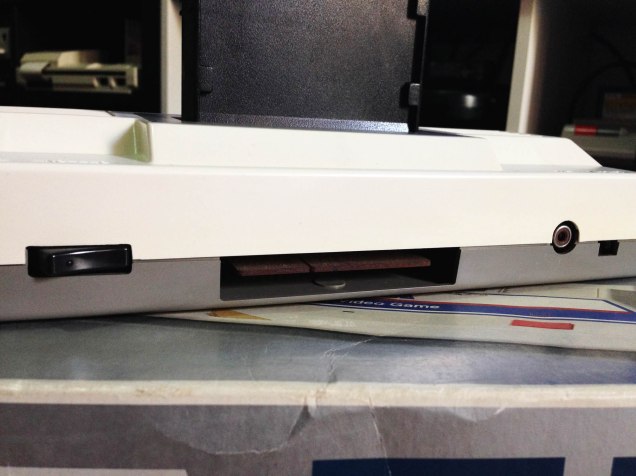 It can also play Sega My Card software (like Dragon Wang here) with the ‘Card Catcher’ adapter, which was released to coincide with the launch of the SG-1000 II a year later.

About that SJ-200 joystick – it’s pretty awful. Very similar in responsiveness to an original Atari VCS joystick, but with a worse design. Both the joystick and buttons are stiff and unresponsive, even in a perfectly working controller. Inside it uses a primitive bending metal ‘leaf connector’ system, which was cheap but no substitute for the microswitches in arcade joysticks, or the innovative rubber membrane system Nintendo utilised in its Game & Watch series and brought to the Famicom.

On the right of the console there’s a standard Sega controller connector plug, which unfortunately is only for player 2. Sega actually released an adapter that allowed you to open the console and replace the player 1 SJ-200 with another controller port, but it’s apparently impossible to find. I might try and make up a home-made one to use Mark III controllers.

Size-wise it’s comparable to a Mark III, and deceptively flat.

Output is RF-only, which means a classic fuzzy picture, if you can even tune it in (depending on where you live).

It’s a pretty cool collector piece, but due to the joystick and RF-only output is not the best choice to actually play on. The Mark III is fully backward compatible with SG-1000 games, has the card slot built in, and (with a bit of ingenuity) has very nice RGB graphics output.