Two new consoles have been released by two prominent Japanese arcade developers – the Family Computer from Nintendo, and the SG1000 from Sega. 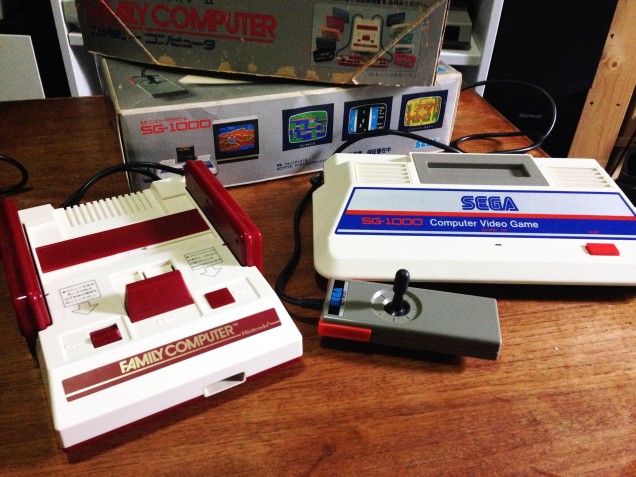 The big game in the arcades is still Nintendo’s Donkey Kong, featuring future superstar-to-be Mario. But the bigger name in arcades right now is Sega, whose Turbo and Buck Rogers: Planet of Zoom are doing incredible things graphically. And Sega now have themselves an answer to Donkey Kong – Congo Bongo. Essentially a conceptual clone of Donkey Kong (and in the later stages Konami’s Frogger), Congo Bongo differentiates itself with an innovative and incredibly impressive isometric 3D perspective.

In turn, both companies’ new consoles have launched with home ports of these killer titles.

Of course, this isn’t the first time Donkey Kong has been made available at home. Aside from a variety of home console ports (including the solid Colecovision version), there is the fantastic Donkey Kong Game & Watch from Nintendo’s smash hit line of handhelds. The Family Computer itself has taken many design and packaging cues from the little handhelds, and this, along with Nintendo’s earlier Color TV Game series has given them valuable experience in the retail space.

So how do the two ports hold up compared to their arcade originals? Sega is taking the lead in the arcades, but are they up to the task of meeting Nintendo’s challenge in the home space?

First up is the original. Firing up DK on the Famicom, the first thing that’s apparent is that the game has transitioned quite well from the arcade’s 3:4 aspect ratio to the regular television 4:3 aspect ratio. 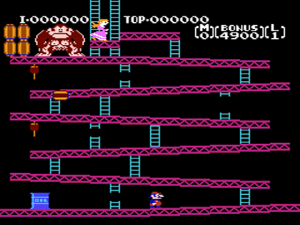 It’s a little squished, but overall it works and is a very faithful port. Gameplay is replicated near perfectly, if anything it plays more smoothly, though it may have to do with the Famicom controller being more suitable for platformers than arcade joysticks.

The major omission is the third ‘cement factory’ stage, so DK on Fami has only three stages before looping. 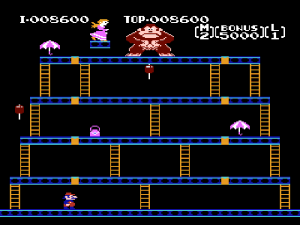 There’s even the ending screen where Mario is reunited with Pauline (briefly).

The arcade intro and interludes are missing, and there are a few sound effect and animation omisions, but it looks and sounds great overall. It’s a clear step above the already excellent Colecovision version, and Donkey Kong on Famicom is likely the most advanced game available on any home platform to date.

Congo Bongo has a very interesting history, directly linked with Donkey Kong. It was developed for Sega by a software engineering company called Ikegami Tsushinki – the same team that did the programming work for Donkey Kong. While Donkey Kong was designed by Shigeru Miyamoto, Nintendo assumedly didn’t yet have the software development pipeline to make a top arcade game in 1981, and hired external software engineers. Sega grabbed the same team for their answer to Nintendo’s smash hit.

As soon as you hit start on Congo Bongo‘s title screen, the disappointment begins. Where is the isometric 3D? As a 2D game Congo Bongo is very much a poor man’s Donkey Kong.

What’s even more disappointing is that the Colecovision, a console with basically identical hardware to the SG1000, managed to have a port which maintained the isometric perspective.

And unbelievably, a port to the ancient Atari VCS somehow did too!

But the poor SG1000 got a 2D version. There are only two stages, the Donkey Kong style stage plays from a side view, and the Frogger style stage from the top.

Despite all this, it still plays okay, if a little awkwardly, and in the grand scheme of things it’s not too far below the Famicom version of Donkey Kong. It’s not helped by the terrible SG1000 joystick, but even if you get around that by playing on an SG1000 II pad, controls are a bit loose.

The SG1000 hardware could have done much better, and Sega proved it in 1985 when their isometric 3D shooter Zaxxon (which was also programmed by Ikegami Tsushinki and used the same arcade hardware) was ported to SG1000 with the 3D effect intact.

It’s little wonder the Family Computer took off. Donkey Kong was a premium product. Congo Bongo for SG1000 is decent enough fun and about as good as most games before that point, but is just an interesting artefact now. 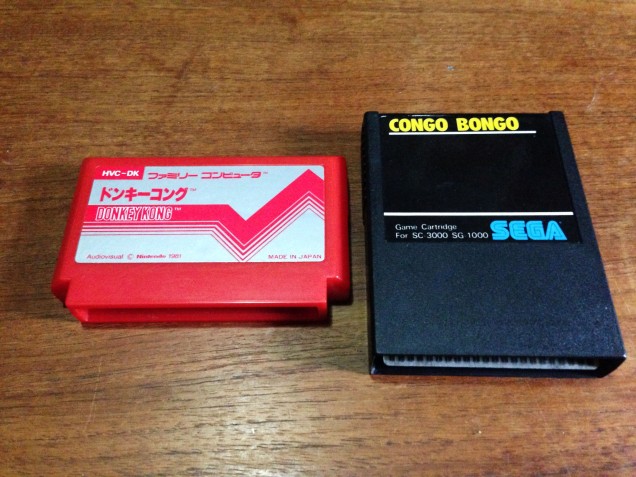